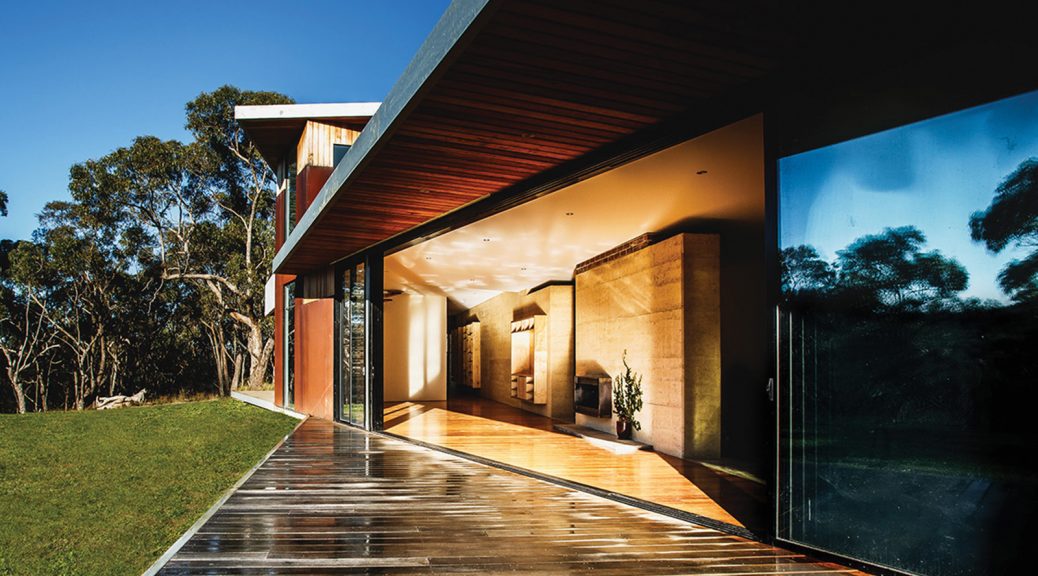 Hidden up a long gravel driveway snaking its way through the native bushland of Officer is the home of local boy Nathan Russo and his wife Paris, who up on a hilltop clearing set amongt tall gum trees, have built their uniquely designed dream home, adjacent to an historic aqueduct.

From humble beginnings as a simple idea, the house works around the concept of embracing both heavy and light elements, with only two closing doors in the entire building and huge double glazed windows which keep in touch with the majesty of the natural environment. The original sketch for the house crudely marked down on a piece of paper, which is now proudly framed in the living room, has also been turned into a statement art piece in the form of a custom door panel. The large metal door greets guests entering the house, allows light in through the small windows in the panel, and reminds Nathan of the simple idea that sparked the fire of his imagination. “It’s quite abstract, but I guess that’s what I love about it. Not a lot of people will cotton on to what the image on the door actually is, not until they take another look at it.” 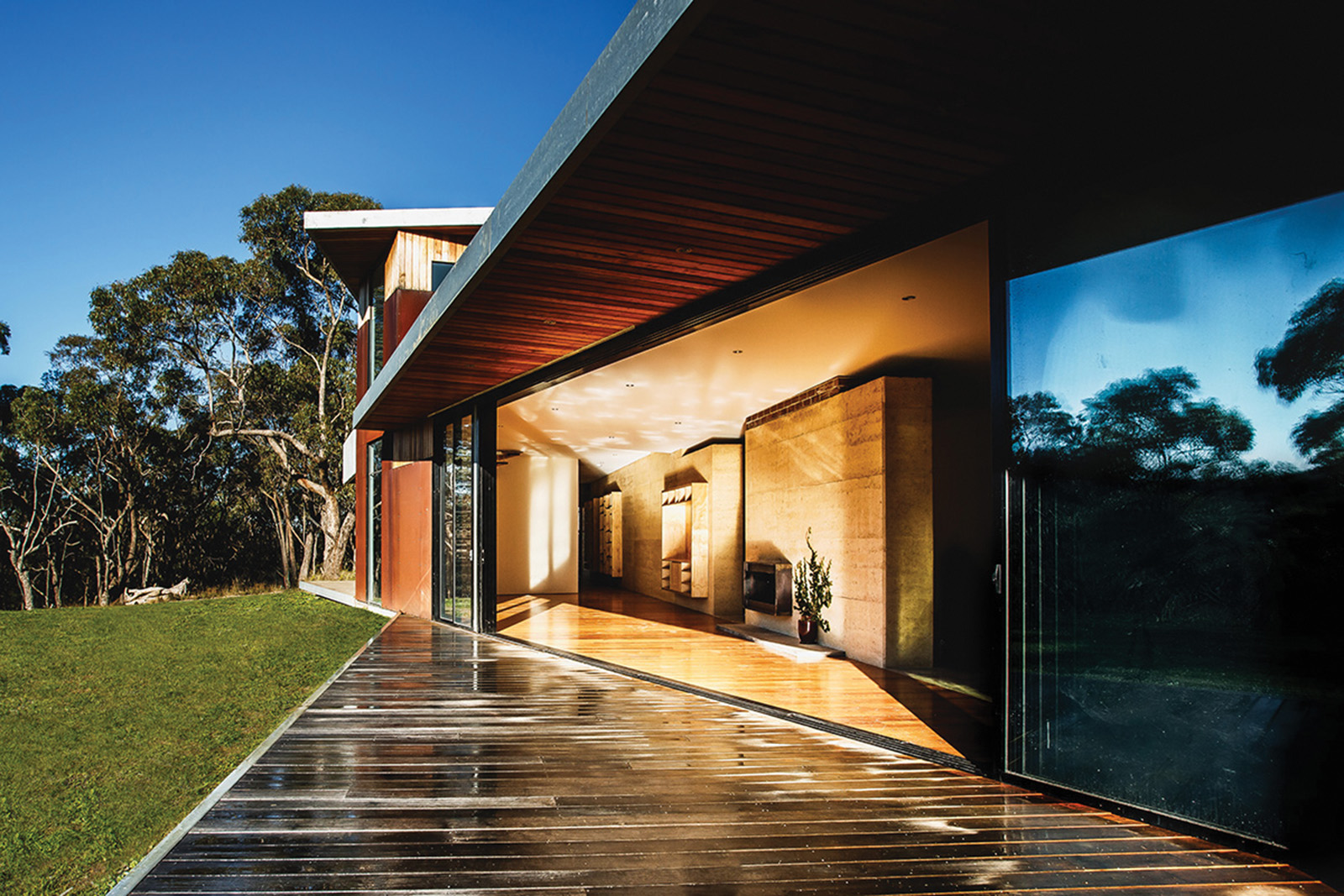 With the help of both his brothers, one an architect and the other a carpenter, the house unites family with functionality and artistic design. “I’ve lived in the area all of my life, and when I noticed this property for sale, I bought it and built on it,” said Nathan. The property is surrounded by silent hills and gumtrees, which often are teeming with wildlife. “We woke up the other morning and saw a koala just outside our bedroom window,” Paris said. The house is known as the Aqueduct House, taking its name from the remnants of the aqueduct which circles the bushland property. “There’s a walking track just down below us,” Nathan gestured to the expanse of tree tops surrounding the house, “but we still have our privacy despite people walking or riding their bikes.” The aqueduct was constructed in 1919, with the main water race a part of a major water storage and supply project undertaken by the State Rivers and Water Supply Commission at the time. The aqueduct played an important role for the expansion of rural and urban development in the area. 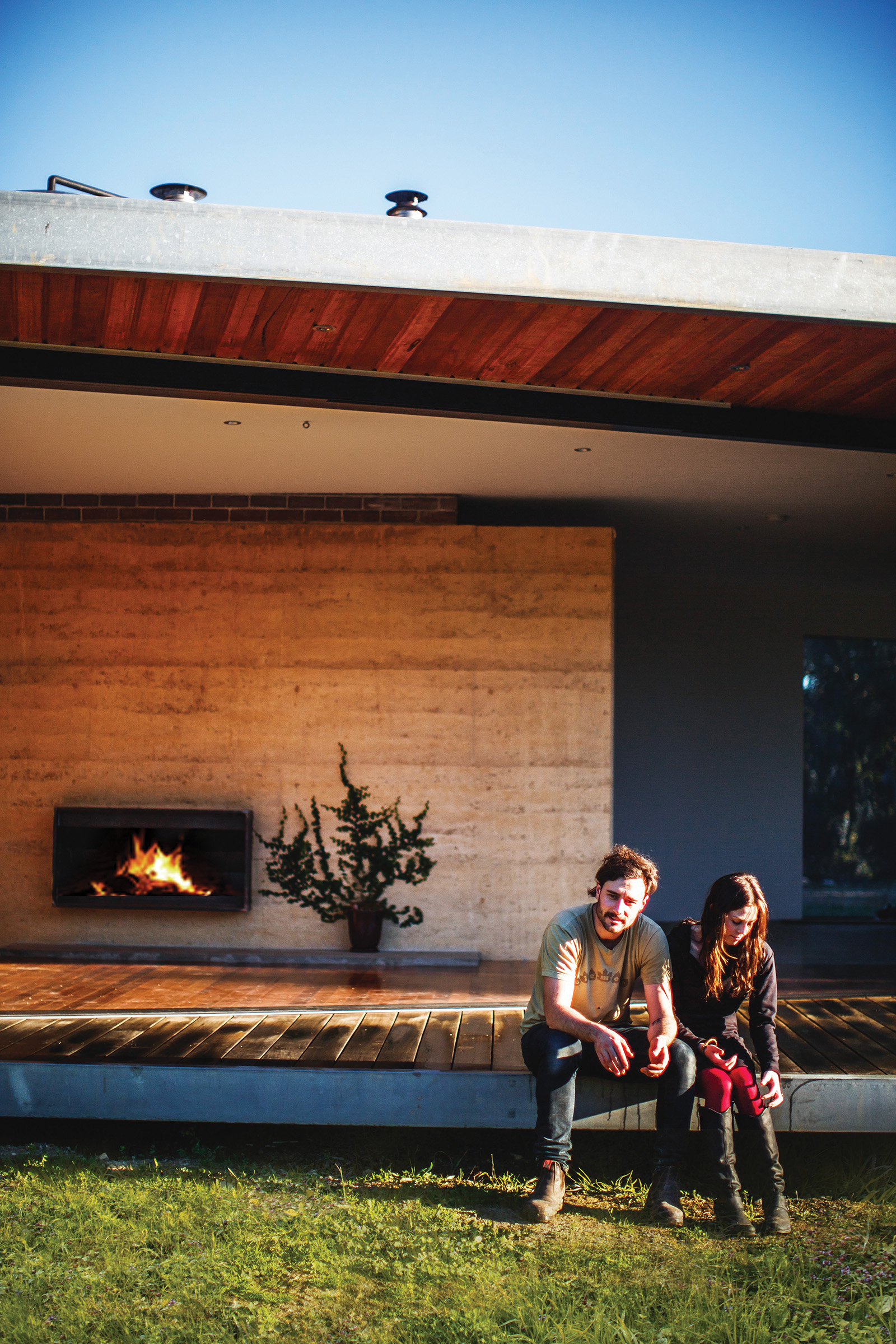 The newly wed couple are extremely hands on in all areas of their life, from the design elements of the house to their recent nuptials. “Nathan was amazing with arranging the wedding,” said Paris. Nathan smiles as he shows us her engagement and wedding ring, both of which he designed himself. “We got married just down the road at my father’s apple orchard. It was an amazing day, and it’s lovely to feel so connected to the area where I grew up, where we were married, and now where we live.” Paris showed us into the kitchen, where she had a pile of soft, warm dough rising in a bowl which she will later turn into bread, baked fresh in their huge wood fired oven, which serves the dual purpose of baking the bread and thoroughly heating the house during the wintertime. “In winter, the house is a really nice, warm place to be,” said Paris. “This oven really draw us close. It’s where we do quite a lot of slow cooking, like casseroles and soups, with fresh, hot bread. The house is heated quite nicely because of the oven, so the kitchen becomes the heart of the home during the colder months.” 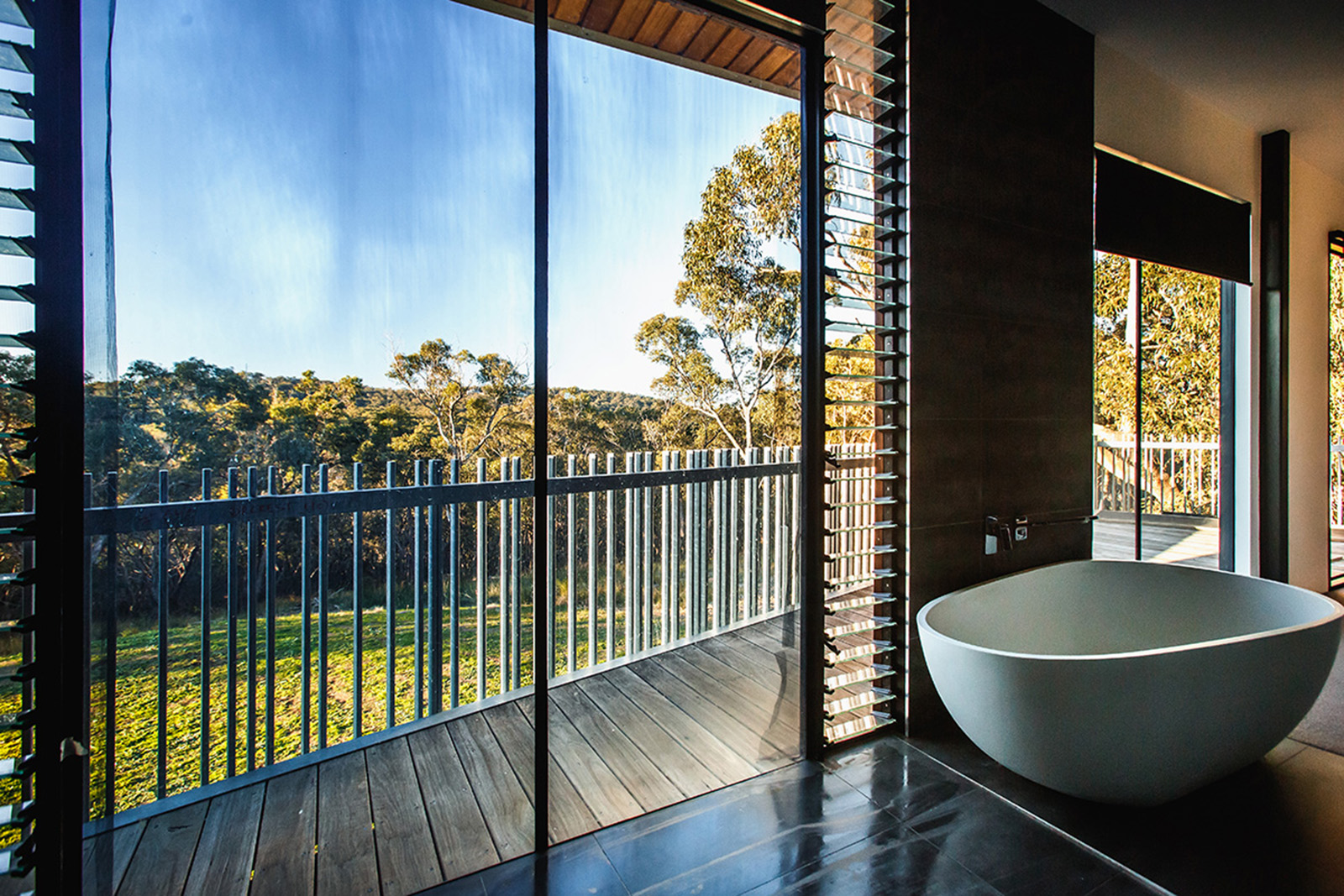 Despite juggling busy schedules, the clever couple have continued to toil away inside the house, constantly working on the many and varied projects still left to complete. “We try to re-use as much material as we can,” said Paris. “The stools here in the kitchen we found out in the old shed at the back of the property, and as soon as I saw them I knew they’d look great. My favourite is the green one, which matches the colour of my mixmaster perfectly.” A huge sliding door, which reaches all the way to the ceiling and acts as a moveable wall between the band room and the bathroom was made, hung and painted by Nathan a week before we arrive, and a climbing plant is being carefully trained and nurtured into a lush green wall covering in the en suite bathroom. “I really love the idea of plants taking over some of the indoor spaces,” said Nathan as he showed us the large, open bathroom. An in-home wine rack initially designed to compensate for a change in kitchen plans now takes centre stage in the stylish but functional kitchen. 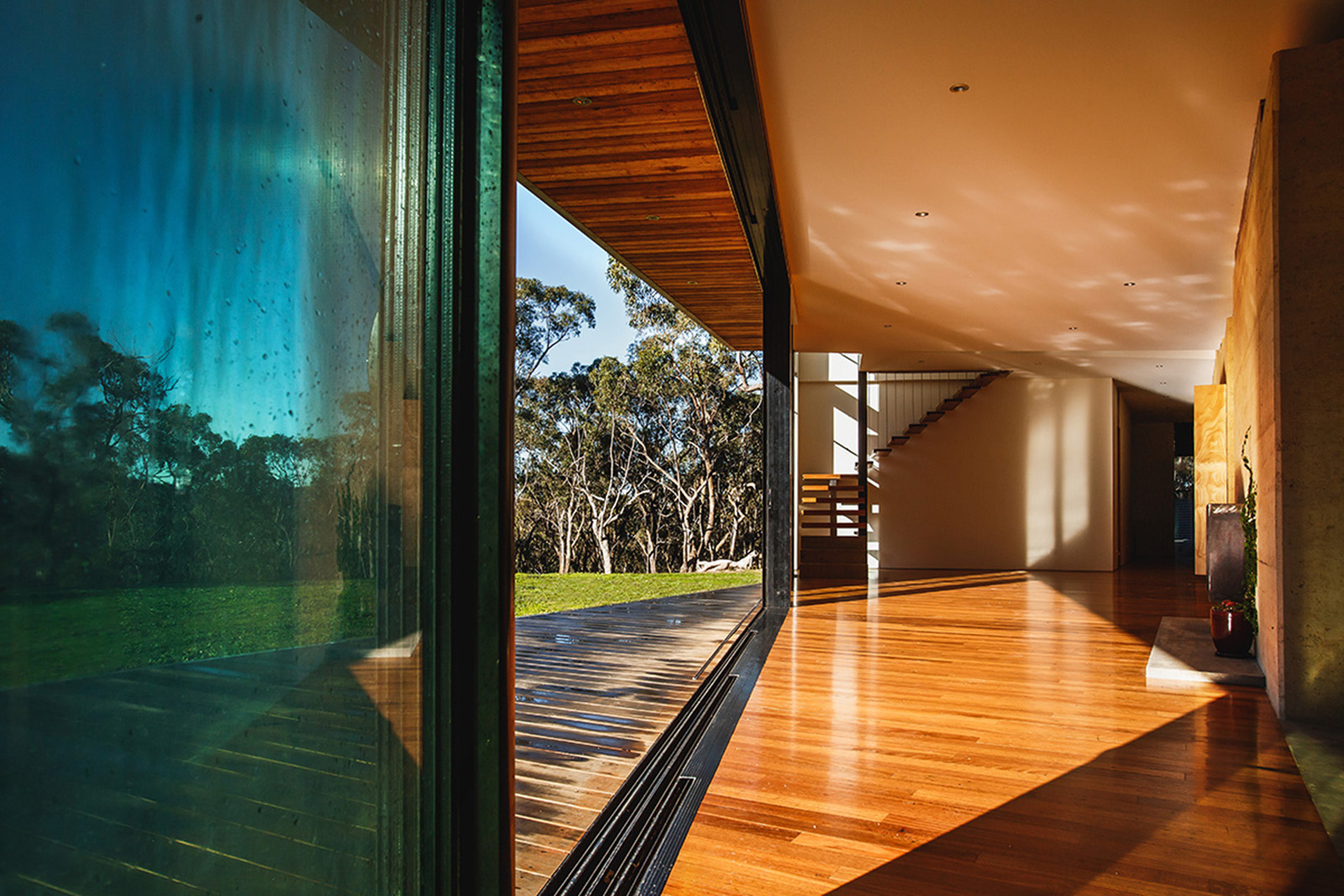 As you wander around the flowing rammed earth walls and into the wide open spaces, the contrast between attention to detail and the couple’s hands on approach to the construction of the building makes one feel as though the house is not just a building, but an art installation, a rural retreat from the busy world, and most importantly, a home.