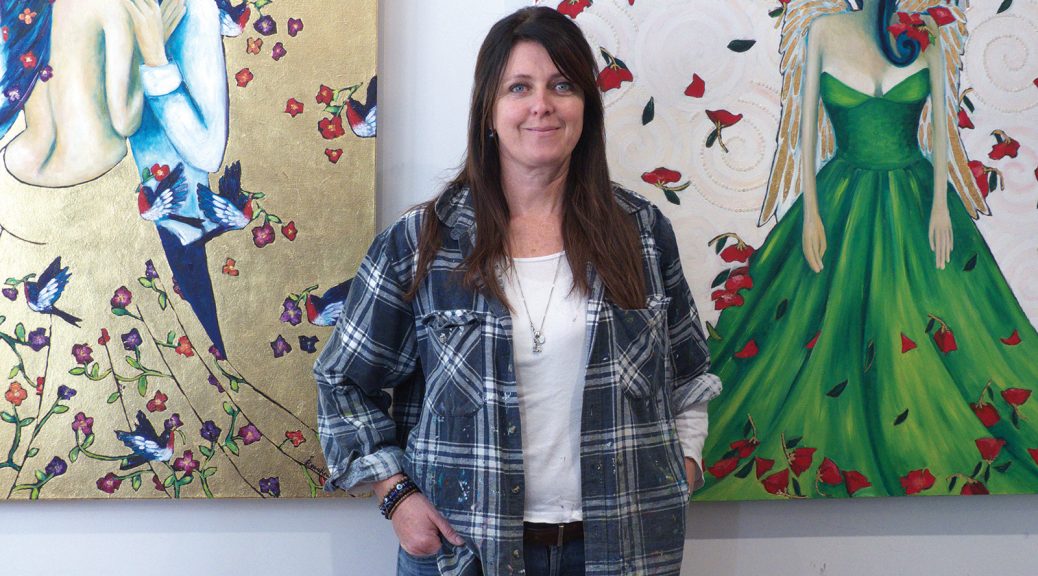 Immense faith and a profound connection with nature have put artist Fiona Kennedy on the right track.

Arriving at Fiona Kennedy’s art studio and gallery at Kongwak, Ali, the bright-eyed Labrador, affectionately greets me. Stepping inside, the golden glow of the late morning sun and a petite chandelier illuminate the ardour and symbology in the contemporary oil paintings. In a corner, a regal peacock is taking captivating form on a canvas, while an old photo of Fiona’s paternal grandmother, an artist whom she never met, is kept close.

Fiona, who has eight siblings, tells me that she didn’t really recognise her creativity as a child, but her father, a creative, did. “He kind of always encouraged me in the arts, and then mum and dad encouraged me to do art school,” she said. “It was just little stepping stones along the way that kind of put me on the right path.” But it was during an art class at secondary school that one of the teachers told her she shouldn’t paint. “So I studied clay at university and majored in drawing, then the lecturers there said, ‘Fiona, what are you doing? You should be painting’. I think it was because I treated the clay like a canvas.”

After university, Fiona married and started a family, leaving no time to paint. Somewhat stifled by suburban living, it wasn’t until they moved to Inverloch that she picked up a paintbrush again and started her first major studio. “It was like a floodgate of things that I needed to paint, and I’m still doing that,” she laughed. 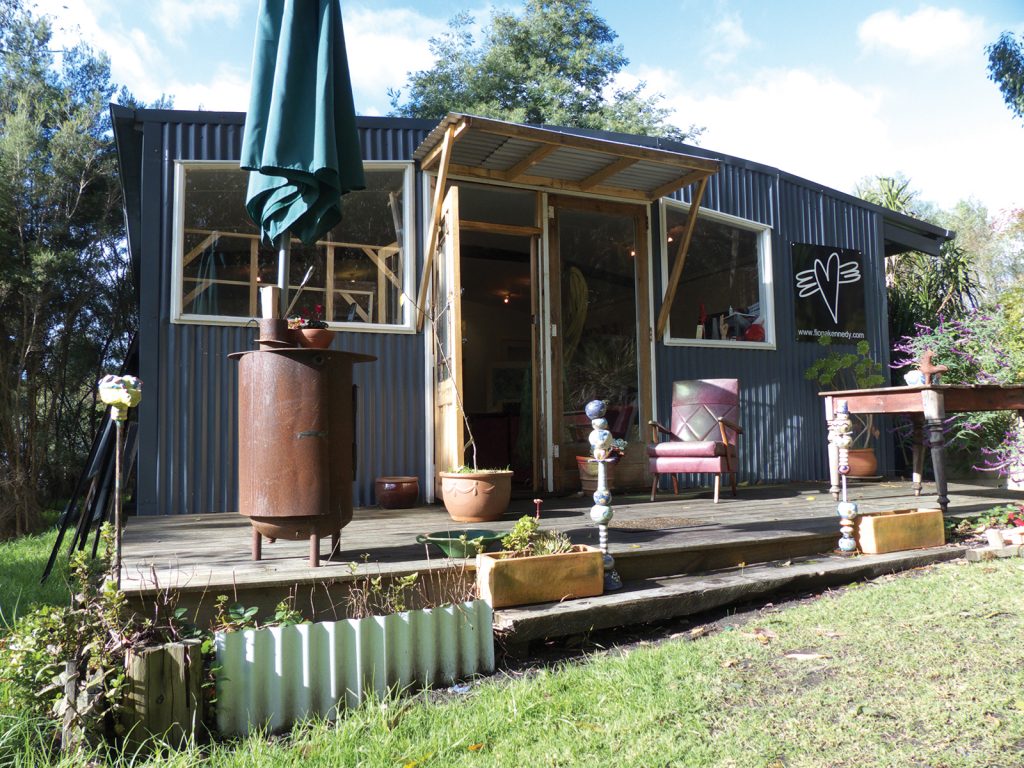 After living at Inverloch for almost a decade, Fiona’s life took another turn. Her divorce meant she was in need of a new home, the ability to make ends meet to support her two daughters and son, and a larger studio. She said the sleepy township of Kongwak, surrounded by rolling hills, wasn’t her first choice.

“I thought, ‘Go to Kongwak, that can be like a transitional period until we decide where we really want to be’. And when I got here, it felt like this was a place of healing … so I went with that and absolutely fell in love with it.”

Despite the financial challenges at the time, Fiona learned to live more simply and remained true to herself and her painting. “I knew that if I stayed on that path, then that would just naturally happen.”
Completing up to about 14 large paintings a year, Fiona sells her work worldwide. Since first exhibiting in Canada, she has been involved with private collections in France, London, Japan, New Zealand and the Netherlands. She is currently putting together a new body of work for a gallery in New York.

Living in a rural area, and with her art being a completely organic process, not surprisingly Fiona’s creative inspiration is mostly derived from a love of nature. “All the little creatures that live in their own habitat talk to you and it’s whether or not you will listen,” she said. “I’m often looking and finding how they live in their own little life.”

While there have been several memorable encounters, Fiona recalls one that was particularly profound. Painting about joy, she wanted to retain an Australian native theme, so she searched the internet for a bird with a similar habitat to the hummingbird, which symbolically represents taking the nectar of life. Online she discovered a little golden spinebill.

“He was perfect,” she said. “I had him up on the screen and I heard this tap, tap on the kitchen window. Here’s this bird I’ve never seen before in my life, tapping on the window, profusely saying, do you want me? I was like, yes! It tapped on the window every single day until I had finished that painting. It never came back again.”

A strong recurring symbol in her colour-drenched and somewhat Celtic-themed work is the use of spirals. For Fiona, they represent an eagle’s path. “An eagle will fly upwards but he spirals upwards, and the higher he goes the more he sees,” she said. “So if we can sort of see life a little bit the same, we tend not to sweat the small stuff down here. Rising above and seeing things from a completely different perspective can often help us.”

Just like the raven-haired artist and her five sisters and two daughters, dark-haired women often feature – in a glamorous, old Hollywood-style kind of way – in her work. “I guess being a female Australian artist I kind of want to capture that naturally too, the feminine side of the world, and that comes out strongly with my love of nature.” 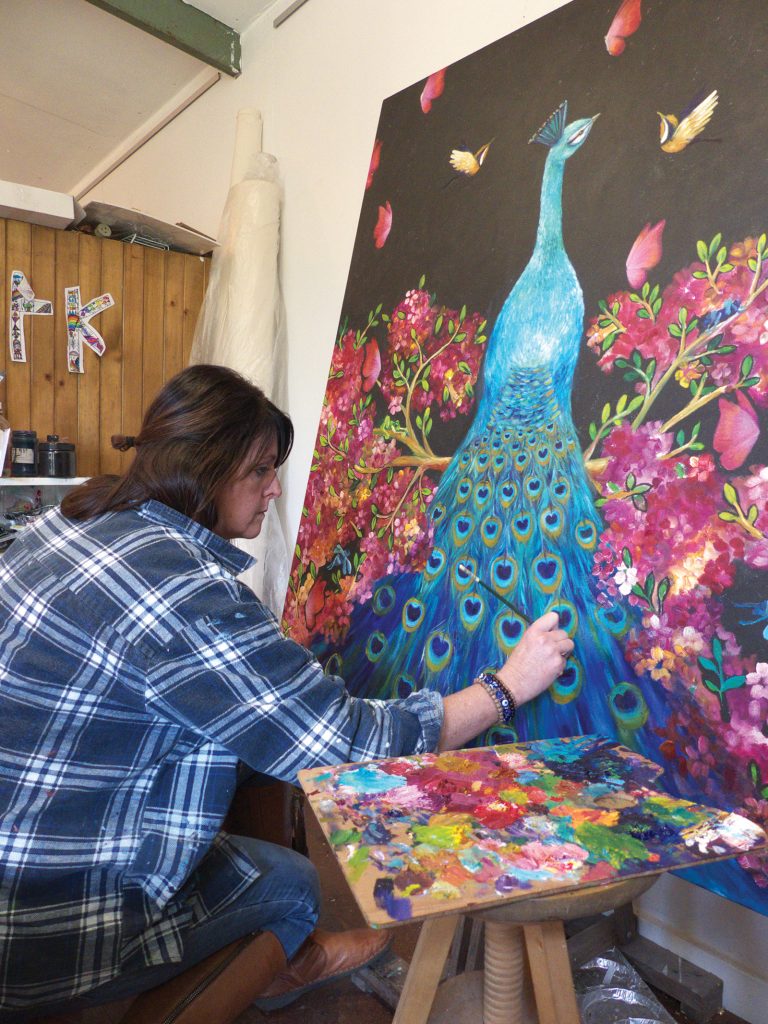 Although predominantly using oil paints, Fiona likes to utilise a few other mediums, namely sequins, Dutch metal gold leaf, 23-carat gold and occasionally glitter. “I use sequins (and gold leaf) to give it a different dimension, so the painting actually moves throughout the day. Different light will capture it and … change it.”

It’s her preference for painting generous-sized artwork that amplifies its impact. “I can kind of throw myself right into a big canvas and get totally enraptured in it.”

She mostly prefers to sell her work from home, rather than galleries. “I find that art is really for your soul and you need to get to know the artist a bit better,” said Fiona, who also believes that in order for art enthusiasts to truly connect with the artwork, they need some sense of why the artist created it in the first place. “I really love people coming out to the studio and seeing that.”

Fiona offers kids’ art classes at her studio on Sundays, when the Kongwak Market is held. She also runs evening classes for adults during the week, where they can utilise the space for creative expression and enjoy a glass of red.