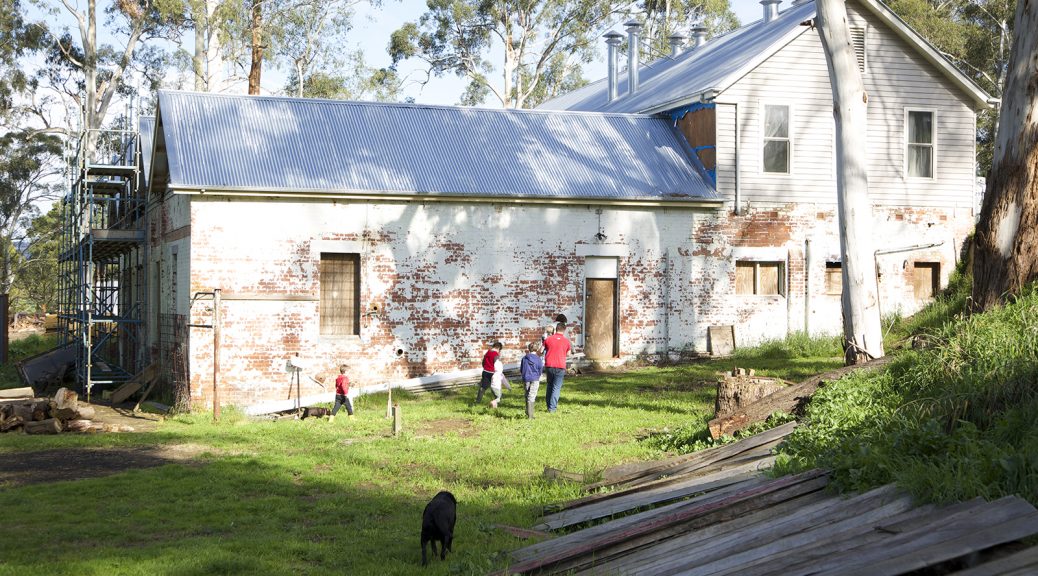 A Warragul couple have taken on the mind-boggling task of turning an old milk depot into their family home.

After many years of standing as a mysterious, derelict testament to another time, the old Darnum milk depot is finally being given a new life. The mammoth task of renovating and converting the 90-year-old building into a family home has been undertaken by Warragul cabinet maker Craig Cannon and his wife Chantelle, a creative and adventurous couple with five delightful young children.

The old depot, situated beside the Moe River, was built in 1925 by Morris Brothers as the River Butter Factory. It was sold in the 1950s to Woodruff Dairies, who used it as a milk depot. Then in 1970, Petersville took over until it closed in 1982.

Craig said they saw the building for the first time 10 years before buying it. “It was for sale then and we walked through it and thought ‘you’d have to be crazy’. We then waited until we had five children and other commitments before taking it on,” he said laughing. “Of course it wasn’t the plan; it’s just what eventually happened.

“The real reason we bought it is because we had run out of room where we were. We wanted more space and an acre of land and although it looked like a lot of work, it ticked all the boxes.”
Twelve months on, Craig and Chantelle completed the first 18 squares of the upstairs living space, five days before their youngest child was born. To add to the challenges, their son was born with spina bifida.

“It’s an added complication, which we obviously didn’t foresee,” Craig said, “and it means many trips to Monash Medical Centre to see doctors, particularly for Chantelle, but our son is 18 months old now and doing brilliantly because it’s a mild form, and he’d absolutely melt anyone’s heart.”

Chantelle said because the building had been left derelict for more than 30 years, a lot of work had to be done to complete the first stage. “To begin with there was about 30 centimetres of dirt with grass growing in it on the roof.”

When Craig started pulling up the old iron, he discovered he was walking on grass roots that were holding it together because the timber underneath had rotted away. “I’m very glad I didn’t know that,” Chantelle said.

Underneath the section they have completed is another floor about a metre below, hidden away, which is tiled and sloped. “It was part of the old factory floor,” Craig said. “They used to bring the milk in at the top and the whole system from there was set up using gravity and using the earth to keep things cool.”

With the first stage of the building complete, they have started working on the downstairs area, where they had to take out pyramids and concrete engine blocks that were wedged deep into the ground before levelling the floor. “We ended up getting a five-tonne excavator with a rock breaker inside the downstairs area that worked for a full day.”

Chantelle said every part of the project so far had been complicated. “It took eight months after we purchased the building to get through dealing with the heritage overlay on the outside of the building.”

There was a problem with the heritage part of the planning because it’s the only building left standing of its type, Craig said. “We had to have approved window positions and the same style but we were able to use power-coated aluminium instead of timber. We were very lucky to get it through. The back section is more than 10 metres from the peak to the ground so the less maintenance we have the better.”

He said they pushed ahead while the plans went through and, knowing they could replace new for old, they bought Colorbond roofing because of its lasting qualities. It was, however, rejected by council and had to be replaced with galvanised iron. “It was a sore point but in the end we were happy because I do love the look of the galvanised iron and it does suit the building. We found the heritage part of the process very frustrating. The shire don’t really tell you what you can do, they just tell you what you can’t do when you ask. If we’d had a book with all the dos and don’ts, it would have been easier.”

The downstairs area has a double brick wall running through the centre between the two groups of roof peaks and each side has an inside area of 25 squares. The building’s total area is about 70 squares, making it a very large house, so they will use one 25-square area for shedding and storage. 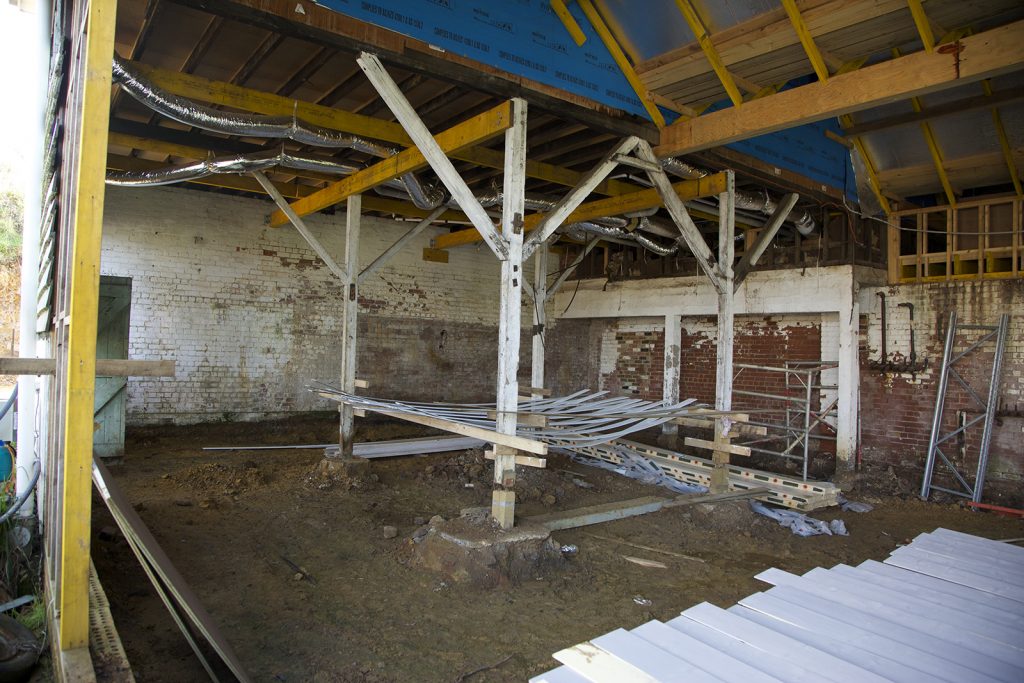 The couple have allowed five years to complete the project and the shire has given them twice the normal length of time, with a four-year building permit. Craig said they had previously renovated a house in town that took them the same time to complete.

“We’ve come up against many challenges along the way, but we knew we probably would. We weren’t completely romantic and ignorant about what we were getting into.”

Chantelle said it’s hard going at the moment especially with five children but it will be amazing when it’s finished. Their neighbours and the community have been very supportive, which is encouraging.

“There have been other highlights as well,” Craig said. “We stopped and built a cubby house, which was enjoyable and nice for the kids. It was a project we could start and finish. It was the same when we built the Hobbit chook house, which was fun.”

“Craig and I both grew up on farms,” Chantelle said, “so it’s nice to get out of the town and have space outside so the children can play with the chooks and find bugs. It’s so peaceful and there are nice views. Unfortunately we haven’t found any gold, just a few old bottles and a spanner.”

They both said they were still “absolutely” happy they started. “But it’s a big project,” Craig said, “and we would be lying if we said there weren’t times when we’ve asked ourselves ‘did we think enough?’”