Travel the long driveway toward Balgowan Homestead in Neerim South West Gippsland and the beauty of this property begins to reveal itself. Either side of the driveway are enormous oaks and cypress trees and through the trunks is a scene of a parkland dotted with trees that are 135 years old. The trees form a large part of the majesty to Balgowan one of the region’s most significant and long standing rural holdings. 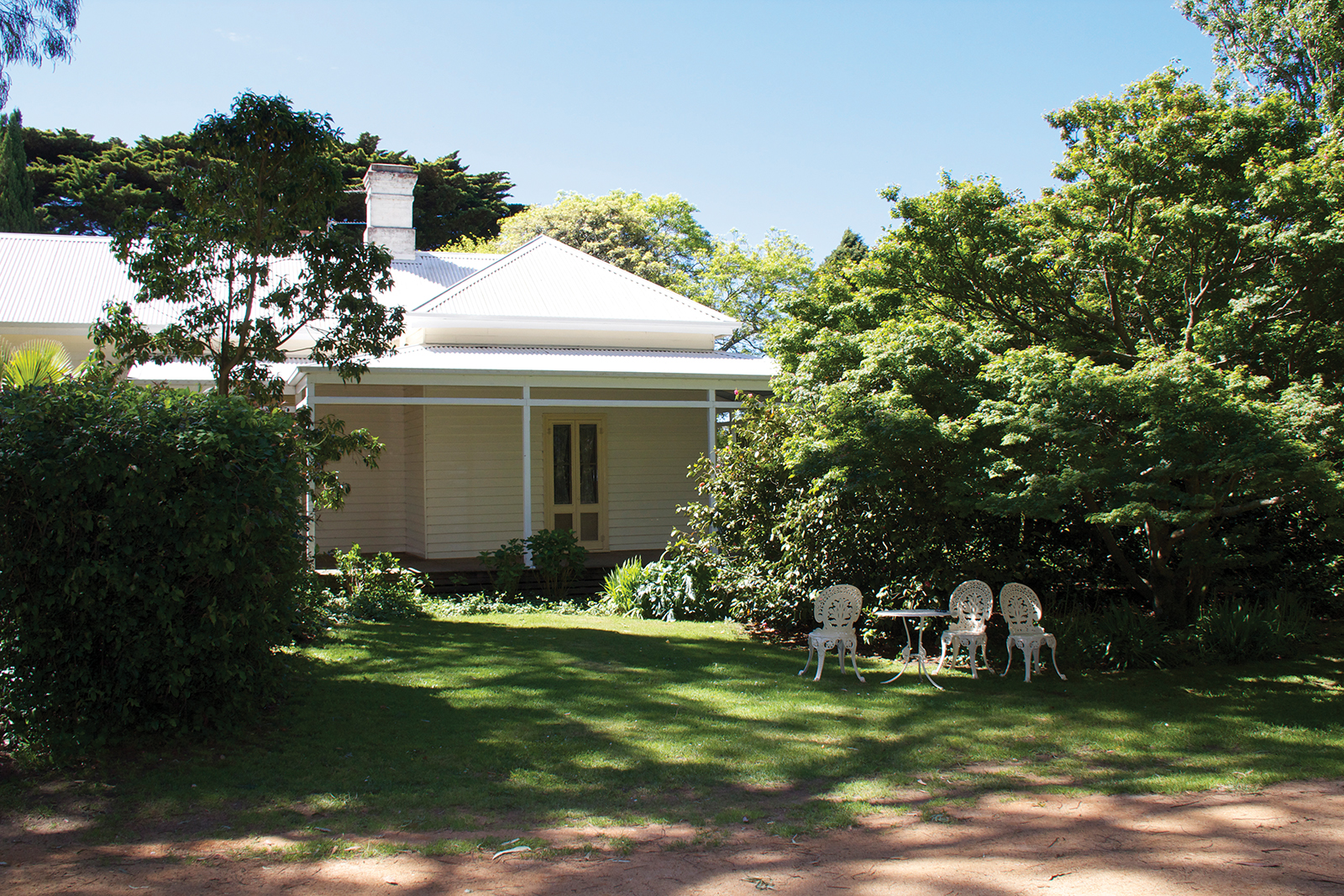 Balgowan is currently owned by Shirley Trennery and Ted Hazlett who purchased the 120 acre farm and homestead in the early 1980s. They were instantly taken by it. Prior to that the farm was owned by the Algie family from 1878. The Algies came to Australia from Balgowan in Scotland. Cousins Matthew and William Algie purchased the cleared crown land and established the farm with crops, cattle, a dairy and creamery. “Originally the land was covered with thick ancient forest with Mountain Ash trees as tall as 300ft standing cheek by jowl,” said Ted. It took 500 men using cross cut saws to clear the forest. Then the stumps were removed by fire that burned underground through the connection of tree roots. It is said that the fire lasted from 1874 to 1878. Deep divets remain in the ground where the trees died. 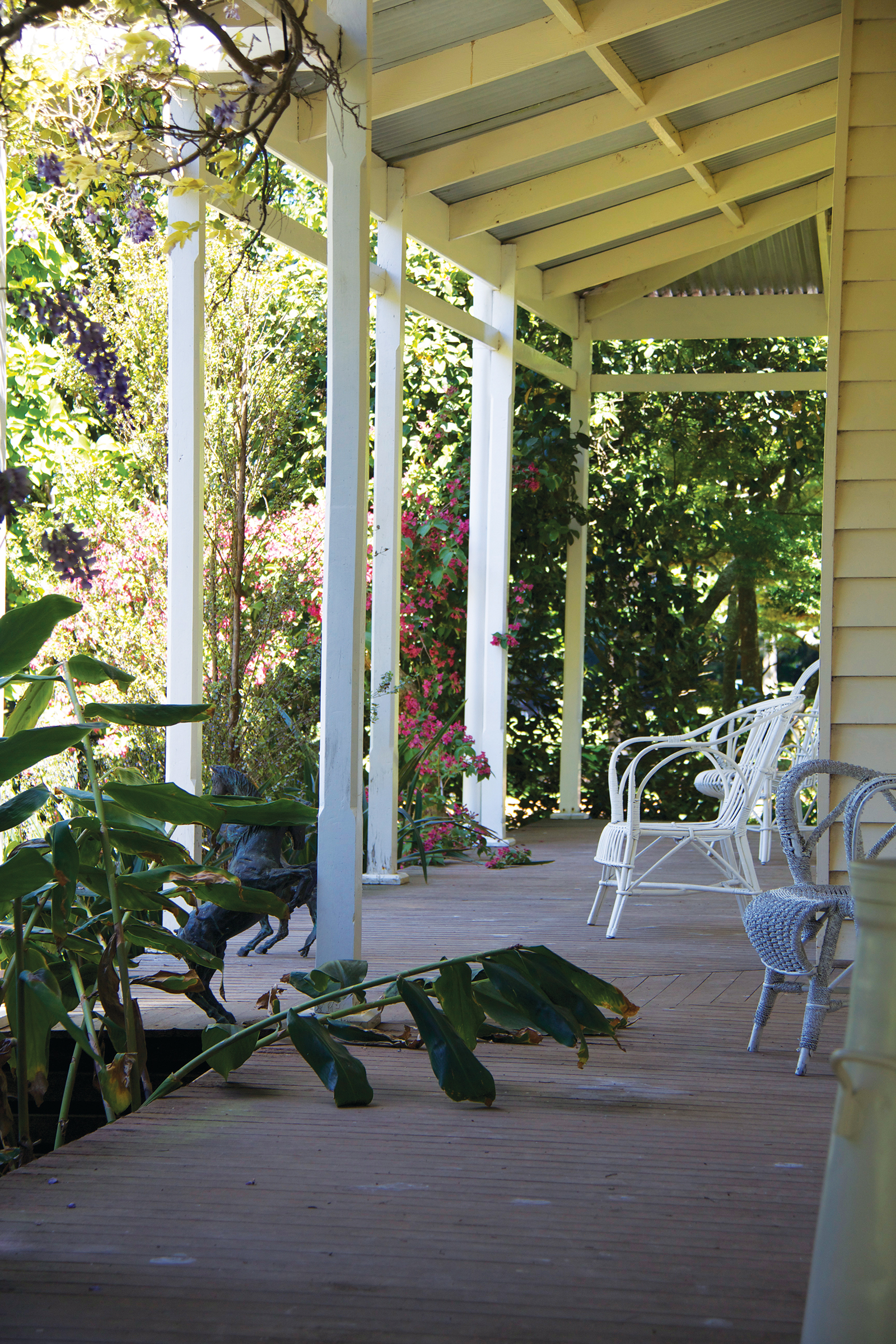 “We were the first outsiders to buy one of these Algie properties in 105 years,” said Ted. “I went to buy a place in Jindivick and was the losing bidder at the auction.  Andrew Algie, came up to me and said we should look at his parent’s property as the auction board for Balgowan had just gone up. So we came up and bought it that day.”

“We were bewitched. Evie (Andrew’s mother) took us inside and we sat beside the big plate window and she served us tea with beautiful China at the antique Walnut table – with the birds in the wisteria fluttering inches from us. Later we walked to the bottom of the driveway and I said to Shirley, ‘What do you think of the place, could you live here, and she said, ‘Could I what.’ So we sold our properties and pooled our money.”

Elvie Algie, the last Algie to live in the home had been a nurse and came to Neerim South in the 1940s to run the Neerim South Soldiers Memorial hospital. It was here that she met her husband Dave. Balgowan was passed to them in the early 1950’s,”Evie was very creative and very well read she had a collection of 10,000 books in the home.”

The homestead is a simple classic that has limited exterior ornamentation due to its practical use over the generations as a functionally family home. It is set within magical gardens that are framed within a selection of significant trees. Arguably ‘Balgowan’ has some of the oldest and finest tree specimens in the region.

The driveway established in the 1950s is bordered by tall oaks. To the left of the driveway is an open paddock dotted with beautiful 130 year old Stone Pines. Once you reach the top of the gently inclining driveway you can barely see the house from the border of large camellia trees, rhododendrons and old rose bushes that traverse the entry gate.

‘Balgowan’ means daisies on a hill and the farm is pristine with lush grass, and is the perfect habitat for the beef cattle that amble around the paddocks.

The house was built between 1903-1905 by Matthew Algie for his son Thomas. Many of the trees were planted at the time of settlement to offer protection from the easterly winds. The ancient Elms in the north paddock were planted to protect the house from the west winds. Some of the orchard trees including a walnut, hazelnut, pear and cheery plum trees, and an orange and camellia are all well over 100 years old and they continue to bare fruit.

A fully grown Holly tree and another camellia alongside the house were planted at the time of the build. The gnarled trunk of the Holly Tree gives a clue to is age.

Another significant feature of the property is the croquet lawn at the rear of the homestead. The lawned area was used as the first bowling green for Neerim South. A tall Golden Elm, Golden Ash, Ginkgo and variety of Palm Trees create a shady haven. “When they are fully in leaf they are a golden yellow and light up this area like a light.”

Among the remaining old trees the garden has continued to evolve. “From about 1950 David and Evie Algie extended the garden, laid out the front driveway and planted many more trees,” said Ted. And, he and shirley have continued the work  adding the Wild Wood Walk which flanks the front paddock along the driveway, and the Little Beech Forest on the southern boundary of the home block. They have created a park-like atmosphere with their planting of Victorian era trees including Bunya Pine, Hoop Pine, Monkey Puzzle Pine, Dawn Redwood, Sequoia, magnolias and many types of cedars and oaks.

“To ensure the massive Stone Pines continue to be a presence, seed has been collected and planted by us and our neighbours. It has been a challenge to keep the garden in order as rabbits, wombats, possums and the peacocks have their own way of helping in the garden,” said Ted.

At the top of the driveway is an impressive Manna Gum tree and following the path to the left takes you along a hedged walkway leading to the privet walk and the orchard area. Even further still is the open paddock where the views stretch endlessly to the north. During our tour the old elm trees were yet to leaf and they loom above the bare branches swaying and whistling in the wind.

“It is a lovely place to come home to. And on a hot day this area (around the croquet lawn) is several degrees cooler. It is not a manicured garden it is a country garden. And the house is a basic Gippslander, there is nothing flashy about it.”

Balgowan continues to be a working farm and is also home to Shirley’s stud cattle. The couple have shown cattle with success at Royal Show level for many years.

Unlike many historic properties, where the stories and history becomes lost over time, the history of Balgowan is there to see in black and white in the form of a charming exercise book that was handed down through the Algie family and is now entrusted to Ted and Shirley.

It is a fascinating read and describes every purchase made to build the house – right down to the price of the timber and the iron. The total build was 266 pounds.

It is clear that Balgowan was also a social hub in the early part of last century as the exercise book also records the scores of a friendly cricket match between the locals and ‘the townies’ in the 1920’s.

It is a fascinating account and one that Ted proudly holds as custodian. Ted and Shirley feel a strong sense to continue the legacy established at Balgowan.

“We’ve planted thousands of trees all over the place. No trees go on forever, you’ve got to think ahead about what it might be like here one day.”