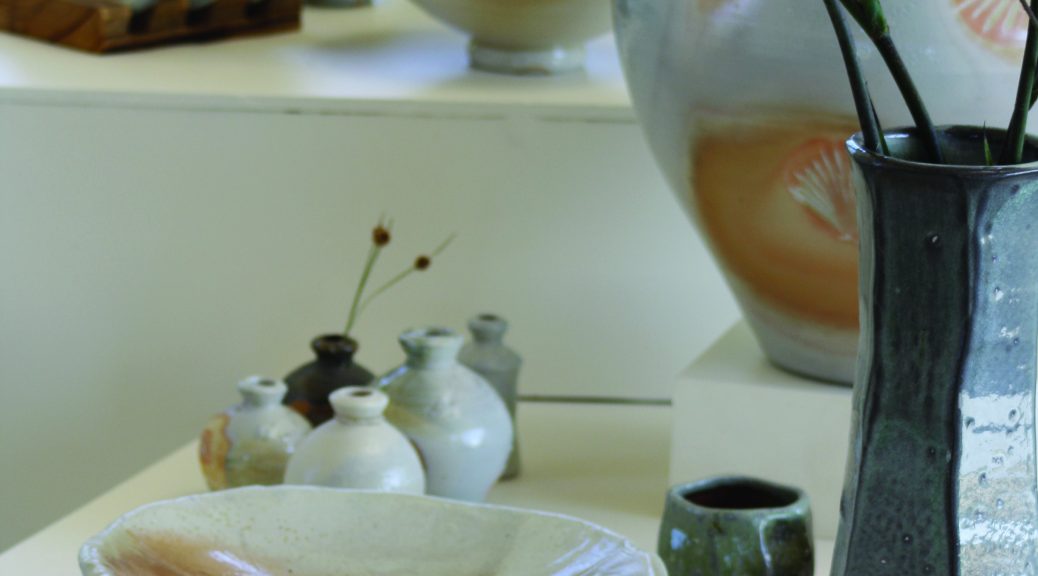 On his picturesque property in Leongatha South, ceramic artist Zak Chalmers is creating serene, contemporary pieces using the age-old process of wood firing. The Valley Plains Pottery is at the end of a long driveway that snakes along a plateau, with bush on one side and a stretch of open farmland on the other. Endless views take in the valley and Wilson’s Prom in the distance. Wombats, wallabies and bird life share the habitat. 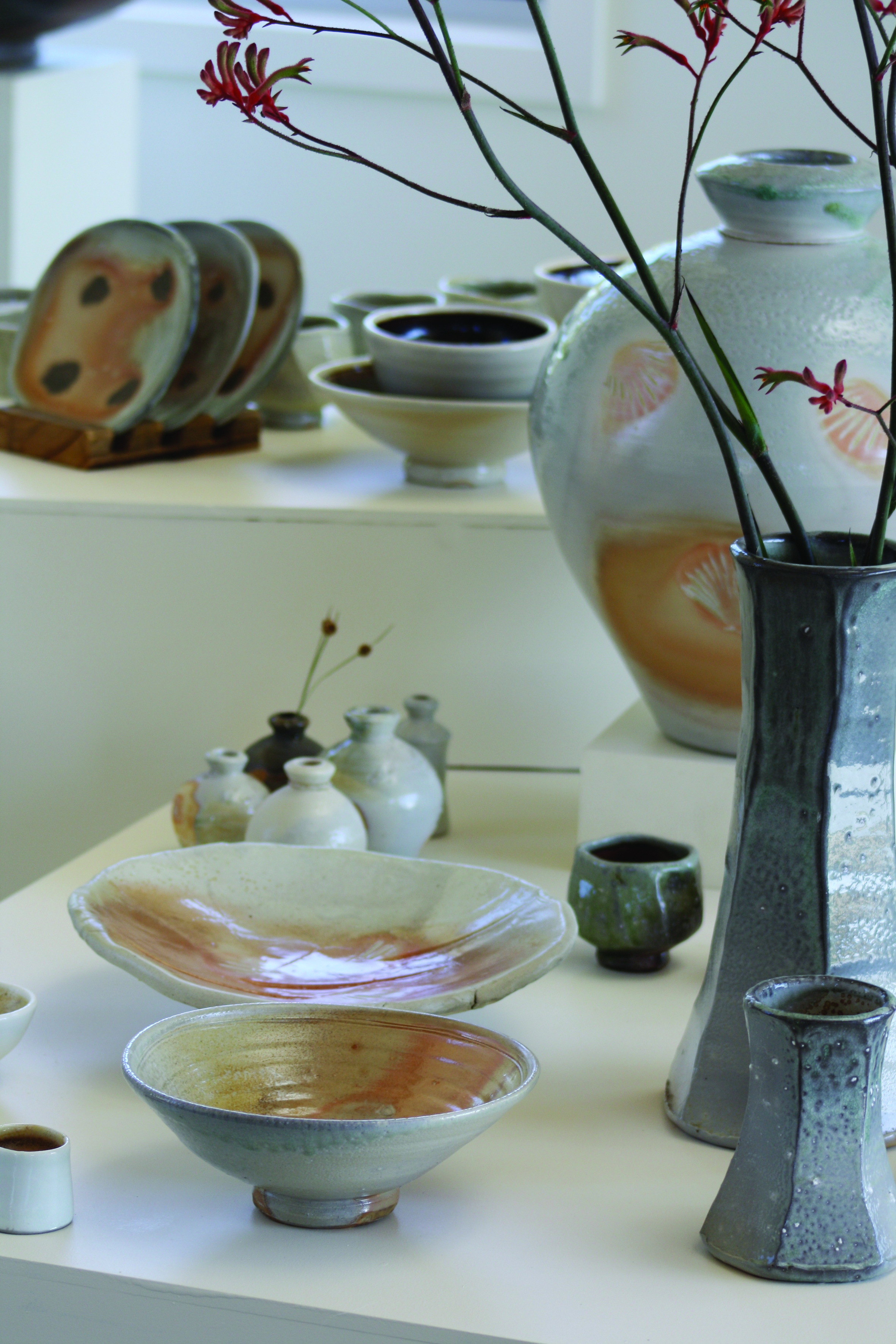 At the top of the hill is the gallery and studio and the modern family home, all built by Zak.

Dotted around the gardens is some of Zak’s work. Large urns sit beside gum trees or smaller delicate pots perch on the fence at the rear of the gallery.

Stacks of wood rise from the lawn – they are in themselves artwork.

“We were sick of stacking wood so we thought we’d make something interesting,” said partner Tania.

Of course wood is a crucial element in the traditional process, and Zak spends about six weeks every year collecting wood from around the property, ready to fire the traditional kilns, which form the basis of his art.

There are two kilns built in traditional style, again by his own hand.

The four metre Anagama kiln was built, while he was in his second year of a Bachelor of Applied Arts in ceramics at Monash University. 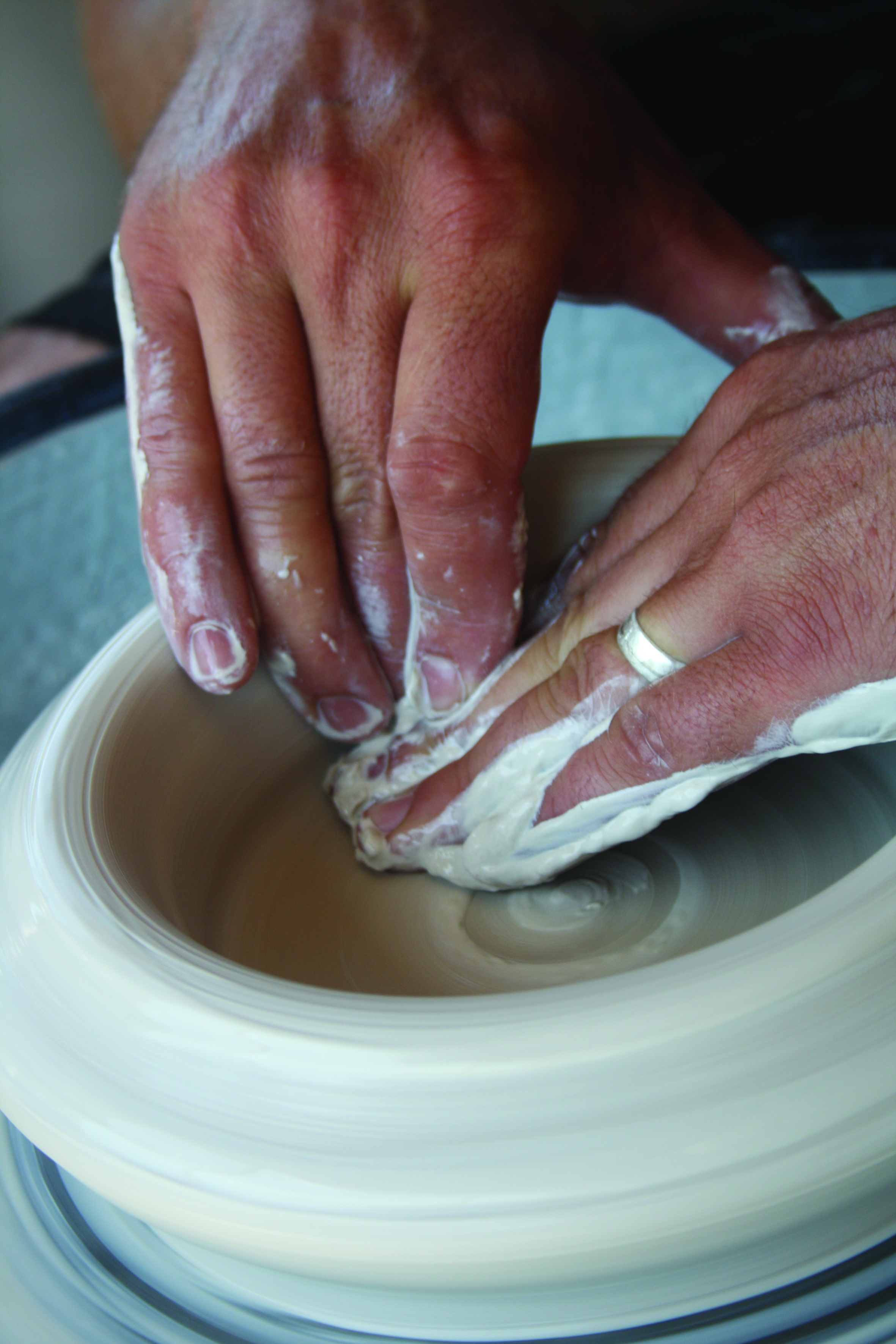 The bricks were a 21st birthday gift from his late father who sourced them from an old pottery in nearby Koonwarra.

The Anagama is fired over four days, twice a year, and usually a group of friends are recruited to help. The kiln needs stoking every 20 minutes or so, to help maintain a constant temperature required to glaze the pots.

The other kiln is based on a Cantenary Arch design. Again built by Zak, it is made from recycled fire-bricks and has an adobe over the arch, made from clay from the property. Each firing holds around 120 pots stacked on shelves inside the kiln. This kiln is fired five times a year and the packing alone takes one and a half days and the firing takes about 30 hours.

Once the kiln reaches temperature, it is shut down and a slurry of mud is used to fill external gaps. It is left to cool until the contents are ready for removal. 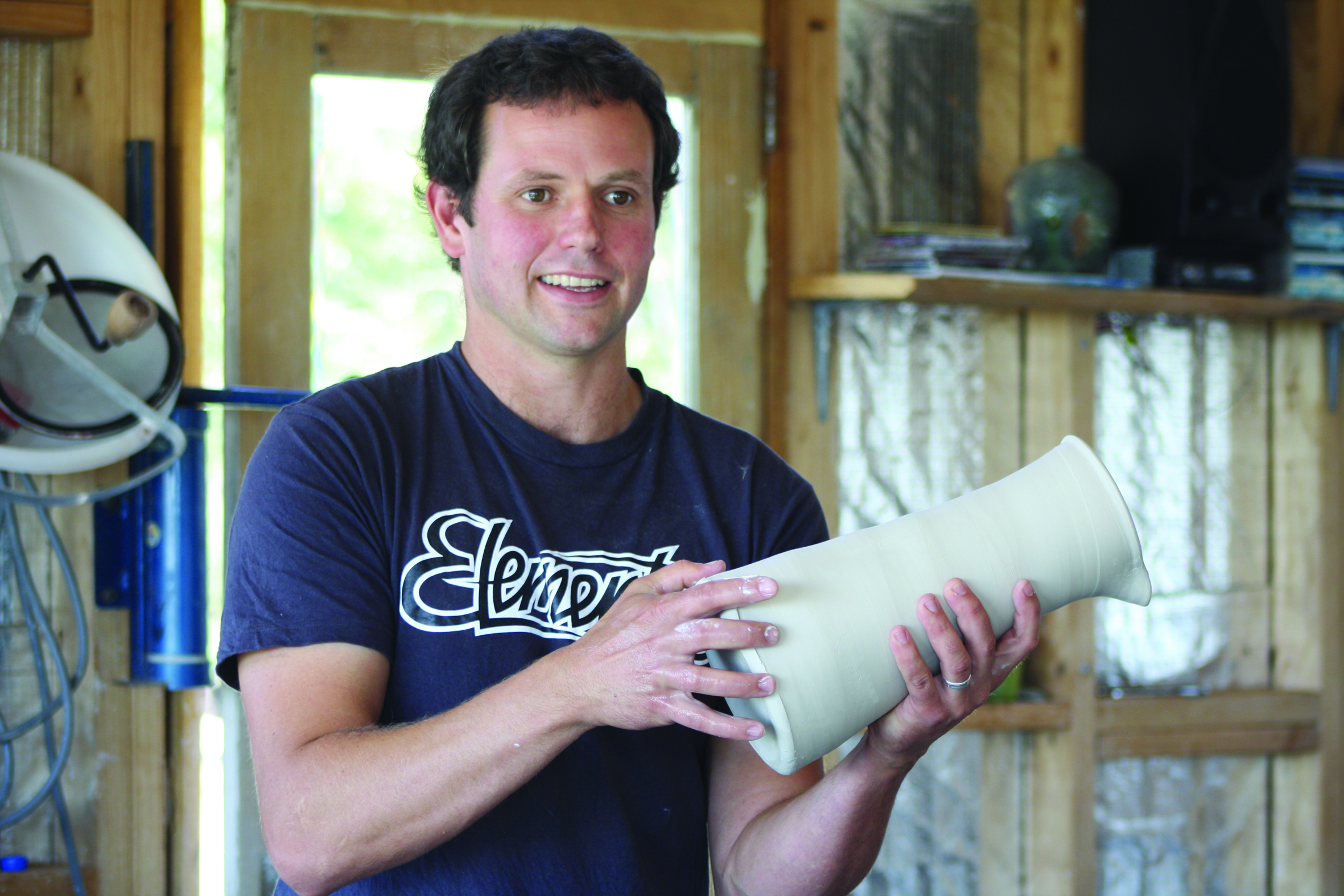 Zak’s work is founded on a simple philosophy, to make useful and beautiful pieces.

“Art can be useful and useful things can still be beautiful. The idea is to make things that can be used in everyday life. Daily rituals can be appreciated and enjoyed.”

For Zak, his artistic journey has had a clear direction that began with an inspiring teacher at Leongatha High School –Al Whitmore.

“He made it seem fun and he was a professional potter and he had a lot of knowledge.”

Since then, Zak has unswervingly pursued his passion, completed honours in his chosen degree and established the gallery and studio space as a showcase of his work.

Wood firing produces a highly variable result, depending on the wood and the challenge of maintaining a consistent temperature inside the kiln. The way the pots are stacked in the kiln also has an effect on the finished glazing. This is the part of the process which Zak enjoys most, and the moment of discovery that comes after the kiln cools and new pieces emerge.

“There is a lifetime of learning with wood firing- new things to develop. The more you learn the more you don’t know.”

Before having their children, Asher and Cody,  Zak and Tania travelled around Australia, researching other studios before they built their own. Later, another research trip, this time to Canada, confirmed that the Leongatha property would be the ideal place for the pottery.

“We thought it would be an ideal spot. The wood fired kiln needs the space and it is a beautiful environment.”

One of Zak’s other passions is surfing and although family and work has reduced time allocated to catching a wave, the beach is only minutes away.

The studio space is somewhat of a surprise. It is orderly and clean, not the mud- spattered space one might expect in a potter’s studio. It reflects Zak’s serene attitude toward his work and life.

Unglazed pots and jugs fill the floor to ceiling shelves, waiting for the kiln. On one shelf is a small, squat piece, the work of son Cody who at five, is already learning the art of the wheel.

Each piece of pottery is hand-crafted from stoneware, porcelain or locally dug clay. The clay is collected from a dam on the property, then taken to the studio in buckets on the back of the ute.

Set to one side of the space is an open studio. From behind the potter’s wheel is the magical view. It makes his place unique and further fuels the inspiration for the work.  The subtle greens, light grey hues of the finished pots, jugs and cups, mirror the colours of the bush and the landscape around the property.

The wood firing process may be time consuming and laborious, but for Zak, it is the essence of his work and is an intensely satisfying way to make simple but beautiful objects.